Join with SeniorCare and community leaders as we rally to raise awareness of the tragedy that is elder abuse. Bring your business banners and hand-made signs and join the fight!

To learn more about Elder Abuse and how you can prevent it, contact SeniorCare’s Protective Services Dept at 978-281-1750 or visit www.seniorcareinc.org/protective-services/. 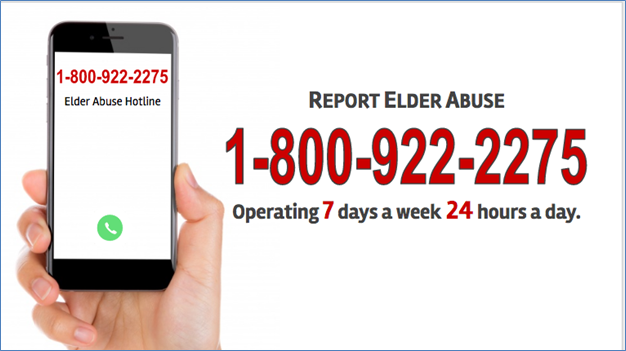 10,000 people turn 65 in the US every day. This trend is going to continue for the next 20 years. Our demographics are shifting, and we now have more elder people in the US than ever before. At the same time that the population is growing, we know that a startling number of elders face abusive situations. Every year an estimated 5 million, or 1 in 10, older Americans are victims of elder abuse, neglect, or exploitation. And that’s only part of the picture: Experts believe that for every case of elder abuse or neglect reported, as many as 14 cases go unreported.

Elder abuse and neglect and take on various forms. It can be physical, emotional/verbal, sexual, financial, neglect by a caregiver, or self-neglect. Elder abuse can occur anywhere – in the home, in nursing homes, or other institutions. It affects seniors across all socioeconomic groups, cultures, and races.

If you suspect abuse or self-neglect, don’t assume that someone has already reported it. In cases of immediate danger call 911. Otherwise, you can the Massachusetts Elder Abuse Hotline at 800-922-2275.

SeniorCare is participating in seven rallies to increase awareness of Elder Abuse this year. The first rally was held in Gloucester on Thursday, June 2, in downtown Gloucester. Gloucester’s event was supported by the Gloucester Police Department, the Gloucester Council on Aging, and SeniorCare.

Rockport’s “Show You Care” rally will be held on Tuesday, June 7, from 12:00 p.m. to 1:30 p.m. at Five Corners (the intersection of Broadway, Railroad Avenue, and Main Street). This event is supported by the Rockport Police Department, the Rockport Council on Aging and SeniorCare.

Beverly will hold a rally in front of Beverly City Hall on Wednesday, June 15, from 10:00 a.m. to 11:30 a.m. Beverly’s event is supported by the Beverly Police Department, HAWC, the Beverly Council on Aging, and SeniorCare.

Ipswich will hold a rally on Thursday, June 16, from 10:00 a.m. to 11:30 a.m. at Five Corners (the intersection of Central and Market Streets). This event is supported by the Ipswich Police Department, the Essex County Sheriff’s Department, the Ipswich Council on Aging and SeniorCare.

There will be a rally in Manchester-By-The-Sea on the Town Common in front of Town Hall on Tuesday, June 21, from 10:30 a.m. to 12:00 p.m. Manchester’s event is supported by the Manchester Police Department, SeniorCare and the Manchester Council on Aging.

Concerned citizens are invited to participate in any or all of these events. Join SeniorCare and our local safety agencies in bringing light to the horrendous crime of elder abuse. Please stop by to show your support!

SeniorCare is committed to identifying and stopping Elder Abuse!

Remaining social is an important aspect of healthy aging. An active social life provides a sense of belonging,…
END_OF_DOCUMENT_TOKEN_TO_BE_REPLACED

As far back as I can remember, the library has been a part of my life. I remember…
END_OF_DOCUMENT_TOKEN_TO_BE_REPLACED

Special summer BBQs will be held in communities. The following schedule is subject to change. Contact the SeniorCare…
END_OF_DOCUMENT_TOKEN_TO_BE_REPLACED

A Matter of Balance Workshop (July-Sept 2022)

A Matter of Balance is an evidence based program that educates and supports aging adults around falling, and…
END_OF_DOCUMENT_TOKEN_TO_BE_REPLACED

May 27, 2022 We’ve all seen the annual Memorial Day parade. Each community has its own particular traditions,…
END_OF_DOCUMENT_TOKEN_TO_BE_REPLACED