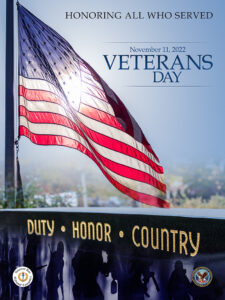 Thank you to all veterans for your time, commitment, and sacrifices on behalf of our great country!

President Biden issued a proclamation this week, stating “Today, we honor generations of patriots who have earned the title of “American veteran” — a badge of courage that unites the finest group of former service members the world has ever known.  With their selfless sacrifice, our Armed Forces have forged and defended the very idea of America — a promise of freedom and equality, democracy and justice, possibility and hope.  We owe them an incredible debt that can never be fully repaid.” (Read the entire proclamation at https://www.whitehouse.gov/briefing-room/presidential-actions/2022/11/07/a-proclamation-on-veterans-day-2022/)

Do you know why the United States of America celebrates our veterans on November 11 every year?

On the eleventh hour of the eleventh day of the eleventh month in 1918, a temporary cessation of hostilities between allied nations and Germany went into effect during World War I. Although the Great War didn’t officially end until the Treaty of Versailles was signed on June 28, 1919, it was at 11am on November 11, 1918, that the fighting ceased. One year later, President Woodrow Wilson proclaimed November 11, 1919, the first commemoration of Armistice Day. November 11, 1918, is generally regarded as the end of “the war to end all wars.” In 1921, an unknown World War I American soldier was buried in Arlington National Cemetery, making this hillside that overlooks Washington, D.C. a focal point of reverence for America’s veterans. Soldiers from World War II, the Korean War, and the Vietnam War have also been buried at the Tomb of the Unknown Soldier.

In May of 1938 Armistice Day became a national holiday. Unfortunately, World War II and the Korean War followed the “war to end all wars.” In 1954 the act of 1938 was amended to read “Veterans” rather than Armistice. And henceforth November 11 became a day to honor American Veterans of all wars.

The sacrifice of veterans and their families is greater than an annual day of celebration. Our Federal Government takes that into account. Veterans can tap into various benefits that can help and support them throughout their lives. There are financial benefits for which veterans and their spouses or widowed spouses may be eligible. Your local Veterans Service Offices (VSO) can help you to take full advantage of the benefits available.

If your VSO isn’t listed here, you can find your town’s VSO at https://www.mass.gov/info-details/find-a-veterans-service-officer-near-you.

One of the benefits of being a veteran is the VA Health Care System. It is America’s largest integrated health care system and once you are deemed eligible it can be your primary care source or you can use it to augment primary care you receive outside of the system. Gloucester has a VA Community Based Outpatient Clinic located at 199 Main Street.  For information on services offered at this location, call 800-838-6331. If Gloucester is not convenient for you, visit https://www.va.gov/bedford-health-care/locations/ for a list of North Shore veterans’ clinics.

If you are a veteran, or the widowed spouse of a veteran, call your local Veterans Services Office with any questions concerning your benefits.

Important: Deadline has been extended to May 7, 2025 You may have heard about a change to drivers’…
END_OF_DOCUMENT_TOKEN_TO_BE_REPLACED

My refrigerator is now packed full of turkey and leftovers. Thanksgiving is one of my favorite holidays.  To…
END_OF_DOCUMENT_TOKEN_TO_BE_REPLACED

I have an older friend, Beryl, who needs assistance in order to continue living in her home. She…
END_OF_DOCUMENT_TOKEN_TO_BE_REPLACED

Thank you to all veterans for your time, commitment, and sacrifices on behalf of our great country! President…

November is National Family Caregiver Month, and is a time to thank and honor the 40+ million unpaid…
END_OF_DOCUMENT_TOKEN_TO_BE_REPLACED

Preparing Your Car for Winter

As we experience fewer warm days and move into late fall, most of us start to make preparations…
END_OF_DOCUMENT_TOKEN_TO_BE_REPLACED