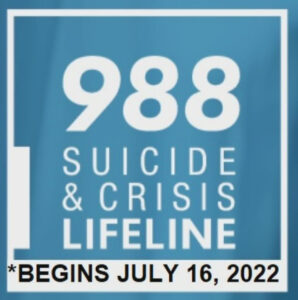 This Saturday, July 16, 2022, a new nationwide service will become available to everyone in the United States.  The National Suicide Prevention Lifeline (1-800-273-8255) will be accessible by dialing a simple 3-digit number—988. The traditional 800-number will continue to be available, but understanding that a person in crisis is unlikely to remember an 11-digit phone number, the simplified 988 number may be easier to recall by those who reach out for help.

The National Suicide Prevention Lifeline network includes more than 200 crisis centers, and has been in operation since 2005. Numerous studies have shown that this critical counseling service is effective in helping callers feel less suicidal, less overwhelmed, and more hopeful.

Suicide is a major public health problem, and was declared the 10th leading cause of death in the U.S. in 2019.  It is a significant concern among older Americans. While older adults make up about 12% of the population, roughly 18% of all suicides are attempted by adults over the age of 60. Among all age groups, men over the age of 85 experience the highest percentage of suicides annually. It is possible that these numbers are much higher as “silent suicides” such as deaths from overdoses, self-starvation or dehydration, and “accidents” are not always recognized as suicide. The World Health Organization released a study in March 2022 that shows a 25% increase in anxiety and depression since the shut-down in 2020.

The Suicide Prevention Resource Center identifies the following as risk factors for suicide among older Americans.

The National Council on Aging lists the following as possible warning signs that an older person may be considering suicide.

Beginning on July 16, 2022, a person feeling suicidal or struggling with depression or other crisis may call the Suicide Prevention Lifeline at 988. In addition, concerned friends, family, or caregivers may also call the Lifeline for advice and counseling. If the situation is life-threatening, 911 should be called immediately.

What should a person expect if they call 988?

After dialing 988, you will hear the following automated message:

“You have reached the National Suicide Prevention Lifeline, also servicing the Veterans service line. If you are in emotional distress or suicidal crisis or are concerned about someone who might be, we’re here to help. Please remain on the line while we route your call to the nearest crisis center in our network.”

Options will be offered for Spanish or other languages (over 150 languages are available) and a special line for veterans and active-service members. Most calls will then be routed to a call center that is situated as close to the caller’s location as possible. Routing the call to a local call center allows the counselor to offer suggestions for services that are available in the caller’s location. According to the Lifeline administrators, 85% of calls are connected with a counselor within 30 seconds of the recorded greetings, and 97% are connected within 75 seconds. Once connected, a trained counselor will listen, understand how the caller’s problems are affecting them, provide support, and connect the caller to resources if necessary.

Anyone can call 988 to get emotional support—whether they are thinking about suicide or not. There is no minimum age, and support is available 24 hours a day, 7 days a week, even on holidays. The Lifeline is available for non-English speakers and people who are deaf or hard of hearing (TTY 1-800-799-4889).

Although many older adults experience well-being and satisfaction in their later years, there are a number of people…
END_OF_DOCUMENT_TOKEN_TO_BE_REPLACED

The other day, I was shopping and saw my Mother-in-Law. I started walking over to say hi when…
END_OF_DOCUMENT_TOKEN_TO_BE_REPLACED

Recently, I was at a luncheon and heard a woman speak about the Hepatitis C virus (HCV).  She…
END_OF_DOCUMENT_TOKEN_TO_BE_REPLACED

This Saturday, July 16, 2022, a new nationwide service will become available to everyone in the United States. …

I have heard a similar story throughout my adult life. People say that they have trouble hearing and…
END_OF_DOCUMENT_TOKEN_TO_BE_REPLACED

Farmers Market coupons are available in limited quantities through local Councils on Aging in 2022.  For information on…
END_OF_DOCUMENT_TOKEN_TO_BE_REPLACED

We are approaching one of my favorite holidays—Independence Day! I love this holiday.  Between the bonfires, parades and…
END_OF_DOCUMENT_TOKEN_TO_BE_REPLACED